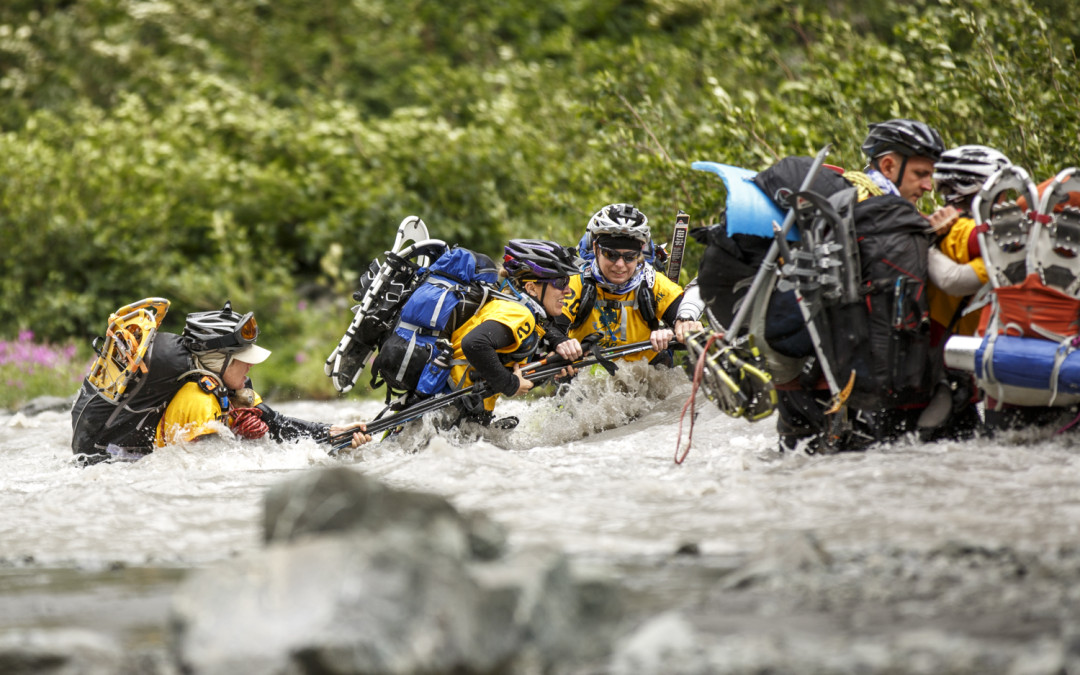 The race got underway at exactly 10:06 am on June 28 from the shores of beautiful Eklutna Lake, 40 miles northeast of Anchorage, kicking off a 7 day, 390 mile odyssey through one of the most magnificent, wild and rugged places on earth.

20 teams started what is almost certainly going to be a transformative journey for them, as this is no ordinary race – the amount of difficulty, danger and raw adventure is beyond anything seen in the AR world in quite some time.

After the beautiful but relatively sedate 12.7 mile trail run prologue, named in honor of our friend and fellow racer Chad Denning, teams faced their first real challenge within 500 meter, as they had to cross the roaring, glacier fed Eklutna river, swollen with runoff after the recent hot spell.

Several racers took swims as they forded the more-than-waist deep stream, including a couple of casualties from the ranks of the camera crew. There was a fairly heroic, life-saving grab by Tim McKnight, who then dragged his fallen teammate back to shore against the current.

The racers then faced an arduous 3 mile climb through the glacial moraine, climbing approximately 2000 feet. The route had navigational challenges, lots of exposure to possible fallen rock and stunning views up and down the valley.

I wish I could have been there when they finally turned the last bend and saw the mighty Eklutna glacier towering above them! I recall very vividly my first glimpse as we scouted the course. Magnificent!

They then had to find away up on to one of the largest contiguous ice fields in the USA, and navigate their way to the opposite side, nearly 22 miles away, avoiding crevasses when they could, and clearing them safely (hopefully!) when they couldn’t.

To say this was an epic stage is a vast understatement to the courage and perseverance of the teams. More than one veteran racer said it was the single greatest stage in their decades long careers! There really aren’t words to describe what they saw and overcame. This was NOT a gentle snowfield – this is living, moving ice river, with seracs, coulours and more crevasses than you could count. Several teams got to practice their crevasse rescue skills from our pre-race training as a couple of snow bridges collapsed, or a moment’s loss of concentration caused a slip on the blue ice around the edges. One of our top teams, Columbia Vidaraid suffered a major setback as Marco Anselem suffered a separated shoulder during a fall and had to be airlifted to hospital in Anchorage.

As an update, Marco is doing well, and has rejoined his team, which finished the leg without him, and now will continue as a 3 person team. They (and we!) wish to thank Team Yogaslackers, who were nearby, and came to assist in getting the injured Marco out of the rather sizeable crevasse.

Jason Magness of Team Yogaslackers had a spill and fright of his own, as the bottom fell out of a glissade shoot he was using, and he ended up “riding” nearly 500 feet down the rocky stream bed beneath. He says it was the scariest moment of his career, but to his credit, he was able to continue the race, and Team Yogaslackers are solidly in 2nd place.

We were very impressed with Team North Zealand Outdoor Sports Center from Denmark, who, despite not having a single glacier in Denmark, roared through the ice-y portion in a solid 3rd place. Their female Sanne has some major blisters already, but they duct-taped her feet and are back on the course in the top 5.

As a race director, especially when trying to create a course that is an “unsanitized,” wild, adventure, you are always trying to find that fine line that balances the comfort and safety of a “normal” race with “danger” (both real, and perceived), as well as the risk of serious injury of worse on a course that not only frightens and creates fear, but also inspires, and gives athletes that chance to exceed their own limits and find out a bit more about their own courage, and as we sweated every team’s traversing of the ice, we pictured the worst, but were constantly amazed by the exhausted yet exhilarated looks we got when the teams finally made their way, 40 miles later, into the ExpAK “Tent City,” where they were served noodles, PB&J, mochas, coffee and more by our attentive TA crews. We took several “wake up call” requests, handed out “Trail Mail” to all the teams, bandaged up feet, fixed torn packs and helped them prepare to return to the course as soon as they were able after one of the singular stages in AR history.

I must say that we are particularly impressed with our “amateur” teams, who persevered and made it through the glacier in fine form (for the most part!). Our two “Adventure Challenge” teams struggled with the huge waters at the river, so chose to approach the TA via a secondary trail (still over 23 miles long!) so they could continue on the course. Our two 2 person teams, Orion and Boom Boom Pow joined forces to make a four person rope team, and as of this hour, were just nearing the edge of the actual ice in the final few miles before a much-needed rest.

It is now 11:35 pm, and we have a few teams still out on the course, and we are following them closely, as the Alaskan “sunset” happens, leaving it slightly dim for them to build on tomorrow. As an aside – Many of our staff and athletes have commented on the difficulties of sleeping in the night when it is really just a lighter shade of dim for 10 minutes.

We had the expected bumps and bruises, as well as an unfortunate asthma attack by one of the world’s strongest female racers, who is planning on sitting out segment before rejoining her team. We hope Chelsea and Team Equilibre the best of luck moving forward!

The stars of the day have to be Team Tecnu, who blazed through the stage in an astounding time of 22 hours, making it one of the fastest non-stop, non-ski crossings ever, and besting our “Best estimated time” guess by two hours. They had an efficient transition, grabbing 2 hours sleep before heading back out, literally passing Team Yogaslackers as they left the TA. Kyle, Mari, Rob and Garrett are a force to be reckoned with at any level.

To help put this massive first Segment into perspective, there have been very few non-stop crossings of any type, let alone without skis, and yet the majority of our field is on track to complete the journey in less than 40 hours. Several racers mentioned that even the “mundane” bits of this stage were more epic than even the best parts of many other races.

Even with such an epic stage under their belts, this is no ordinary race, and the second stage, nicknamed “The Soul Crusher” is, if anything, even more of an overall challenge in some ways, with huge navigational challenges, their first real taste of Alaskan bush, steep cliffs, snow fields, packrafting and more. When our scout team of Mike Kloser, Dave Shuman and Eeva Latauso completed it a few weeks ago, it was speculated that that was the first ever descent along this route.

The teams will have to manage tasks such as getting their team onto icebergs, packrafting across Passage Canal, and getting their first crack at some amazing Alaskan whitewater on their way to Whittier, where they will be rewarded with a 32 mile ocean paddle.

A few words about our TA crew: “Best Ever!” We try to make the TAs a much-needed oasis amidst the miles of uncharted wilderness. They help haul gear bins for all the teams, make hot meals, beverages, read trail mail and so much more, all with smiles and great attitudes. I love these guys!

ExpAk has already claimed a place as one of the most challenging racers ever, and is without a doubt the most stunningly beautiful – we have been so blessed to have had such a magnificent canvas to play with.

We would love to than our sponsors, in particularly Tuthie Africa, who is offering once-in-a-lifetime eco-safaris in Africa, and who understands what makes ExpAk athletes do what they do!

We would also like to thank HooRag for our beautiful ‘rags, and our two resort hosts, the Princess McKinley Lodge and the wonderful Alyeska lodge, which have been our “hosts” for the past 5 days.

One more check of the tracker, and I’m catching a few hours of zzzz’s to be ready when our first teams show up for paddling tomorrow – forecast is for rain in Whittier, but these racers are tough!

Thank you for being an integral part of this special event, and we will see you tomorrow night! Please check out the website for live tracking and become a “dot watcher” like I am!