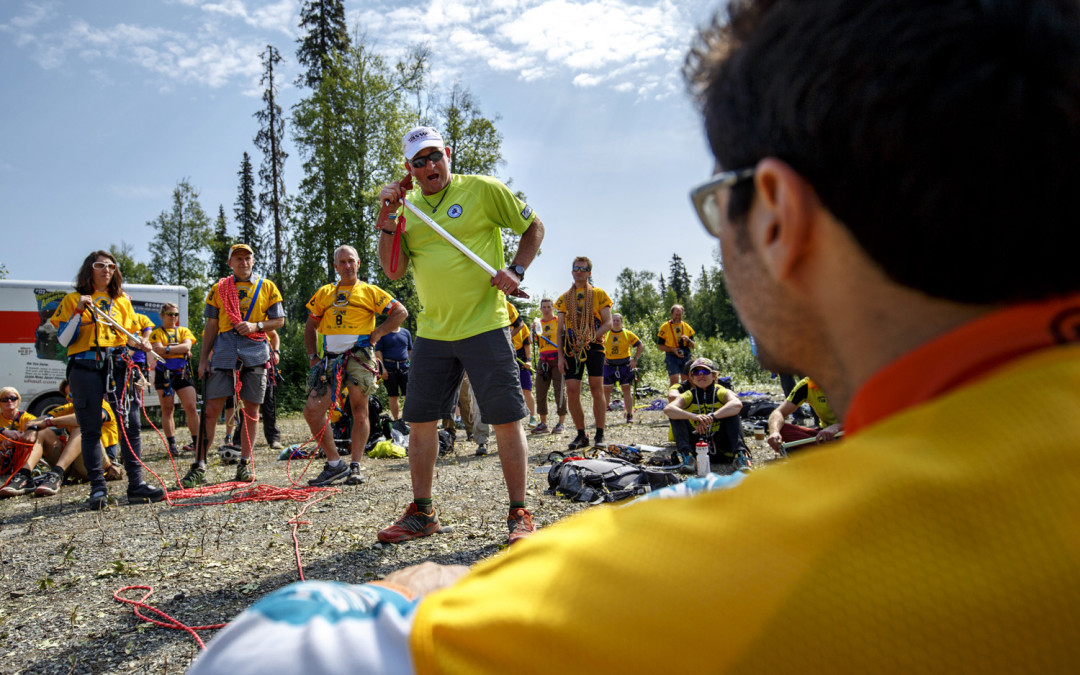 Two years in the dreaming, 13 months in the making, and with the vision to do something that harkens back to the age when the adventure was the main goal, and a race wasn’t “sanitized,” Expedition Alaska kicks off with 3 days of intensive training, gear checks, certifications and a fair bit of fun at the Princess McKinley Lodge near near Denali National park, prior to proceeding to the as-of-yet secret start location on Sunday.

We’ve hosted several major events in Expedition Idaho and Adventure Sports Week, but the vibe and racer energy here this week is a huge step up even from ExpId, due in large part, I think, to the immense challenges that lie before them this upcoming week.

It’s been a while since teams had to do 2 intensive days of crevasse rescue training to get signed off just in order to be allowed to do the first stage of an event! It was interesting seeing even the top teams going through various degrees of struggle to figure out what can be a fairly intensive, complicated system, but we made them repeat the process dozens of times to ensure, in the unlikely event of a fall, that they can safely rescue their teammates.

Roman Dial led a packraft safety and skills class, and they got their first taste of chily AK water and river speed, as he made them all flip their boats and get back in, but they loved it. We followed it up with a beer and cider social with music and several hours of stories from the legends like Mike Kloser and Adrian Crane.

We have also had a bear safety class (as in Grizzly!), and we still have an emergency first aid class yet to come, and they haven’t even got their maps and course books yet! One of the teams commented that it was almost like they are attending an Adventure camp than the normal pre-race that they are used to… for us, it’s like having a bunch of very fit, slightly ADD detail-oriented kids here for summer camp!

I have to say that the “nervous” energy is also at a very high level. Our bear lecture and a few crevasse and packraft scare stories have heightened the tension – either real or imagined. Also, I have to say that just the pure size and scope of the terrain is stunning! Think things like Patagonia, or New Zealand, but bigger!

We are finishing up the second day of check in and gear checks this afternoon, and then, still to come is the “Grand Unveiling,” where the teams get their (awesome!) SWAG and gifts, and the much anticipated maps and course books. MYTOPO.com did another outstanding job on the more than 40 square feet of maps the teams will receive. We want to thank the US ARMY Special Ops Recruiting Battalion for their generous donations of gear and swag for the racers – it really makes a huge difference in the quality of what we can offer! Amongst other stuff, the racers also get official race “Racers Only” race gear, large sew on patches, Instafire, custom coffee/tea mugs, complete with little spoons, “glow in the dark” hats, much-coveted bumper stickers, and, of course, the glow in the dark “Expedition Alaska “Suck it up Princess” bracelets!

From my observations, we have some very prepared teams, and we also have some teams who are making a large leap in their adventure racing experience, and will have stories for many years to come! It’s great having so many countries represented, and observing how different cultures view things, and how different teams prepare for a race of this magnitude.

For me, in some ways, because we have already packed so much into the pre-race, it feels like we’re almost done, and then I realize that we haven’t even started yet! Wow!

From here, we have our major segment by segment briefing tomorrow, then we load out and the adventure of a lifetime begins for these amazing athletes!

More tomorrow after they get a look at the maps tonight – I have been waiting MONTHS to finally share the details of this epic course with the teams – I can hardly wait!