The Alaska Adventure is Over 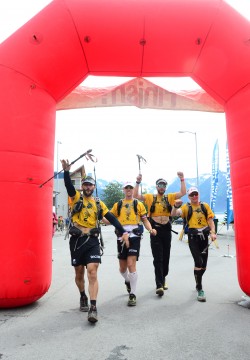 So now, the end is actually upon us. The results are official, everybody’s home from the hill and no-one got injured up Mount Marathon.

The brutal final run followed the official route, the same as yesterday’s massive event, though the teams were a little less hurried about the pace – the lead teams were still only three quarters of the way up the climb when Kilian Jornet’s record 41:48 time passed.

The three flying Danes of North Zealand Outdoors were the first across the line in around 90mins, having flown down the descent, and like most of the people following them, immediately started by taking off their shoes to dump out the gravel and dust that had accumulated. No teams had taken gaiters, but a few had wrapped the tops of their shoes and their socks with duct tape in an attempt to keep the dirt out.

Yogaslackers were next in, Daniel’s feet and knee better than they had been (he’s been very careful in the later stages of the race to keep his feet dry and in good condition). They take second place overall, and duly covered each other in champagne. Cameltoes were next, followed by Goals ARA (who were keen to point out that I made a mistake yesterday: They haven’t been bussed forward at any point on the course either. My apologies!), Traces of Nuts, Equilibre, Orion and then our winners, Team Tecnu. They looked in good shape, not having rushed the run, and trotted out of town in the morning with cheesecake and coffee in hand. Getting through the run safely was obviously a priority – a crisis, an injury and the loss of a team member on the final stage would have forfeited them the win.

They were followed by Wandering Nannut, and then at last our podium was rounded out, as Team Rogue unveiled an Australian flag and jogged over the line smiling. They too had been cautious but strong over the bulk of Mount Marathon. The teams continued to pour in, sore, limping and leaden-footed, jumping and clicking their heels, waving and whooping or just simply stepping over the line with a sigh of relief until the backmark unit consisting of Boom Boom Pow and the Moose Whisperers trotted in together.

All that’s left now is the after race banquet, prize giving (the trophies are some beautiful carved wooden bears, which Team Rogue in particular may find it tricky to get shipped home) and speeches, and then it’s a swift repack and off to Anchorage airport to depart back to the four corners of the nworld. Everyone, from the first to the last team has had an epic expedition, a feat of survival, and a good story to tell, and the adventure is over, for now. Who knows what a future Expedition Alaska may throw at them when it returns.

We’ll publish full rankings as soon as we know them – the variations of full course, short course, skipped stages and lost team members means they’re a little hazy – but for now, your Expedition Alaska Adventure Race podium is:

As reported by Pyro for Sleepmonsters