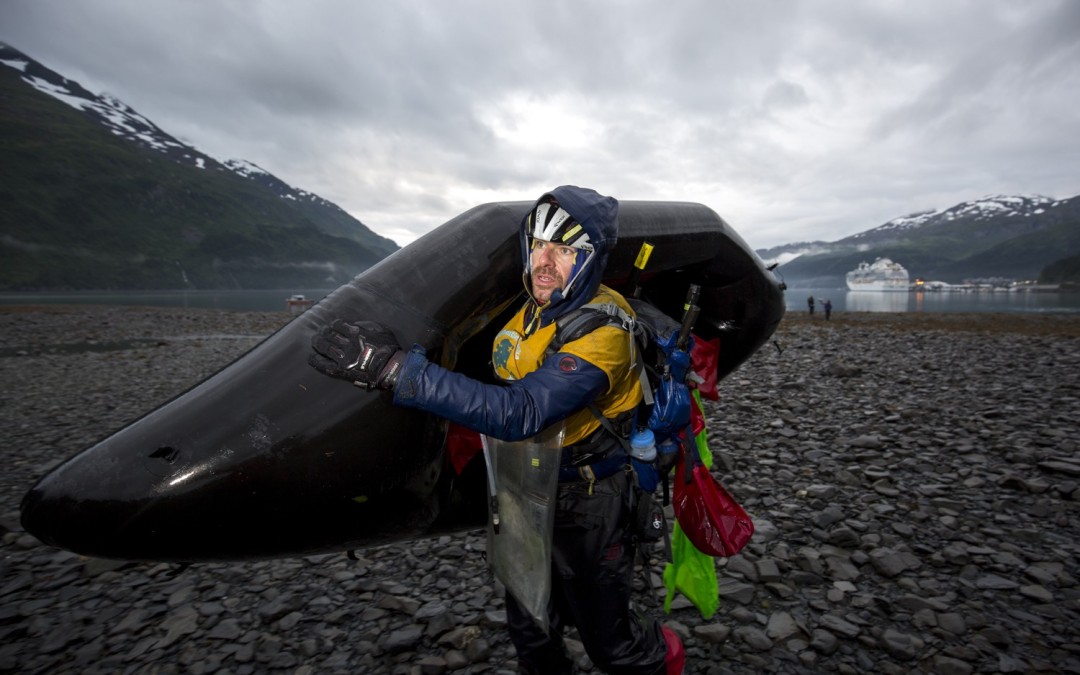 Most of the overnight action has consisted of team arriving at the rafting transition and getting their heads down to await the first raft run of the morning. The means of teams arrival has varied greatly, though.

Some did it the standard, race-approved way, hiking up Ingram Creek, parallel to the Seward Highway, entering the river after the Granite Creek campground and floating gently down the east fork of Six Mile to the whitewater start – thankfully well marked and flagged, so even teams arriving in the moderate gloom of the night didn’t risk flushing down into the canyons below.

Team Everest had had a long night there, arriving just after the section closed at 7pm yesterday. They had had an epic mission over the Soul Crusher bailout route. After losing two 60 litre packs in a packraft flip (not a river crossing as we’d previously heard)), they relocated them, tangled in a strainer a long way down the creek. As they’d been tied together (but not strapped into the boat), they were wrapped and twisted around the branches of the tree, and in a fairly inaccessible place. The retrieval took well over an hour and involved wading, rappelling, and logistics worthy of a Mission Impossible film, working out which line to cut first.

Team Boom Boom Pow had had a similar mission, and were evacuated from the bailout route by helicopter after multiple dips in the cold waters of the creek. They described the difficulty of navigating the braided washout plain, and coming round blind corners to be confronted by massive rock walls. After a number of panicked swims in deteriorating conditions (of both the weather and their personal states), they called in to HQ on their satellite phone and a retrieval was arranged.

The Personal Adventure Challenge teams were also retrieved from the course, but not on the hill. After a sleepless night trekking and rafting where they could, they tried to catch some sleep on the beaches at the end of the Turnagain Arm, and alternate sleeping in the packrafts while paddling across to the checkpoint at the base of Portage pass, but were rapidly deteriorating, cold and tired. After an extended tour around the area (including a trip out to Whittier) their support crew were parked up near CP17 and picked them up, transporting them and Team Gung Ho to the whitewater put in.

The first raft run was scheduled to depart at 5am this morning with a full run of 24 racers, but took a long while to get going. Mainly the time was consumed by the usual concerns of signing waivers, kitting up in rafting helmets and bouyancy aids (or PFDs as they are over here) and safety briefings, but also by the issues of trying to get a complement of cold, tired adventure racers moving at 5am on the fifth day of an expedition. Southern Exposure and Everyday Adventures were the most reluctant to move from their tents, having only arrived just before midnight. Their support crew have done a fantastic job of feeding them, sorting their kit bins and equipment and transporting them from place to place where needed, but were drawing the line at having to kick them awake and get them moving again.

Goals ARA were also slow off the mark, and actually missed the first run when Team NYARA arrived minutes before the raft depart, hurriedly threw some food down, and climbed into what should have been Goals seats in the run. The strain of the overnight trek and paddle was showing as Pete Spagnoli had to concentrate hard on not falling asleep during the safety briefing. He failed momentarily three or four times, eventually waking up with a jolt as he slipped sideways off the dusty tussock he was sat upon. The raft run was supposed to be a ‘first come, first served’ order, and Goals had been at the transition overnight, so were understandably chagrined when NYARA, probably their closest competitors in the race, leapfrogged them. To try and return them back to order, and to allow some safety margin, Dave Adlard has asked NYARA to take a three-and-a-half hour rest stop at TA4, the raft getout.

On the water, things were no less exciting than they had been yesterday. The first run teams worked well through the early part, but a number of cold and tired racers, three of Team Everest included, weren’t in a fit state to run the final canyon. Matts Andersson commented that he couldn’t feel the right hand half of his body on the second canyon, and nearly got bucked out of the raft as he couldn’t tell whether his feet were wedged under the tubes properly without looking down. They took out at the exit of the second canyon, and were warming themselves by a fire at TA4 when we arrived. Just below them, entering Zig Zag in the final canyon, the three boys from Team ‘I Don’t Remember’ getting thrown from their raft on the entry, having run in too far left and missed the good line, bouncing over a semi-submerged rock. The raft guide and the other three racers worked very fast to get them back into the boat, saving them from a nasty rocky swim.

As far as the lead of the race goes, Tecnu made it onto the 8am raft run, with second place Yogaslackers still out on Turnagain Arm and beginning the trek up to Six Mile. Those two are the only full teams who completed the Whittier kayak stage, though it looks like Yogaslackers will not make the whitewater rafting in time. As the first ranking criteria for the race is ‘longest continuous line’, it seems Tecnu will be comfortable in the knowledge that they cannot be caught and, barring a catastrophe, will take the win.

From TA4, the teams have a relatively short trekking leg – at least short relative to the two monster hikes they’ve already been through – before they see their bikes for the first time since they packed them away at McKinley Lodge, for a 70 mile ride over the Resurrection Trail over to Cooper Landing. The weather is cloudy but dry and not too cold, so they may actually be happy to sit down on something that isn’t inflatable and wet…